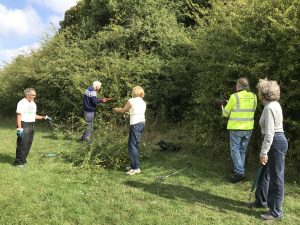 When cattle grazing on the field ceased in 2008, Chesham Town Council took over the grass cutting, initially adopting the same practice as on the adjacent Nash Recreation Field in Chesham. It soon became clear that we had an excellent opportunity to see how the flora and fauna of this field would develop as chalk grassland, providing an appropriate cutting regime was implemented. So after detailed discussion we started a management strategy in 2011 which required one late cut in September, but importantly collecting and removing the cuttings from the field.

The field produced such a rich flora and fauna in its first trial year in 2010 than it was assessed in 2011 and found to meet the criteria for designation as a Local Wildlife Site. Since then the field has been monitored on a regular basis and an impressive range flora and fauna have been recorded, including over 100 plant species, 20 moth species and 18 butterfly species.

As long as we maintain the ‘late cut’ grass cutting and collecting each year, the flora and fauna should keep improving.

The management is a partnership approach with Chesham Town Council doing the bulk of the management, but guided by the Chesham & District Natural History Society (CDNHS) and supported by the Chesham Environmental Group (CEG). Usually there will be at least two CEG work parties during the year to carry out environmental enhancement tasks on the chalk grassland and to the hedging surrounding the site.

It is a very rewarding project to be involved with but there is no doubt we would benefit from more species recorders and more helpers to assist with the regular maintenance tasks. 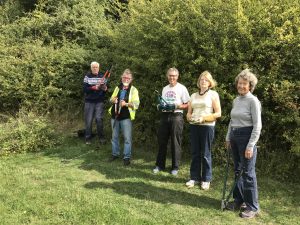 There’ll be more opportunities to make Chesham a better place to live – feel free to come and join us! See our events page for more information.

Read our other blogs

We use cookies on our website to give you the most relevant experience by remembering your preferences and repeat visits. By clicking “Accept”, you consent to the use of ALL the cookies.
Cookie settingsACCEPT
Manage consent

This website uses cookies to improve your experience while you navigate through the website. Out of these, the cookies that are categorized as necessary are stored on your browser as they are essential for the working of basic functionalities of the website. We also use third-party cookies that help us analyze and understand how you use this website. These cookies will be stored in your browser only with your consent. You also have the option to opt-out of these cookies. But opting out of some of these cookies may affect your browsing experience.
Necessary Always Enabled
Necessary cookies are absolutely essential for the website to function properly. This category only includes cookies that ensures basic functionalities and security features of the website. These cookies do not store any personal information.
Non-necessary
Any cookies that may not be particularly necessary for the website to function and is used specifically to collect user personal data via analytics, ads, other embedded contents are termed as non-necessary cookies. It is mandatory to procure user consent prior to running these cookies on your website.
SAVE & ACCEPT